Cervantes’ visit to Laroya in 1594 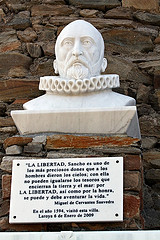 On September 9, 1594 Cervantes is already in Baza, where he will have problems collecting taxes. The truth is that in Baza he received two lots of alcabalas: one of 3,342,320 maravedís, corresponding to Baza and the towns of his jurisdiction (Cúllar, Zújar, Caniles and Benamaurel); and another of 50,812 maravedís of the rest of the towns of his party (Freila, Laroya and Macael); a third lot, referring to Somontín and Fines remained uncollected.

The problem that arises is if Cervantes visited these towns to collect the alcabalas. . .

If you want more information, I suggest you read the interesting article by Juan Grima published in La Voz de Almería www.somontin.info/node/46

You can find out more about which cookies we are using or switch them off in settings.

This website uses cookies so that we can provide you with the best user experience possible. Cookie information is stored in your browser and performs functions such as recognising you when you return to our website and helping our team to understand which sections of the website you find most interesting and useful.

Strictly Necessary Cookie should be enabled at all times so that we can save your preferences for cookie settings.

If you disable this cookie, we will not be able to save your preferences. This means that every time you visit this website you will need to enable or disable cookies again.

This website uses Google Analytics to collect anonymous information such as the number of visitors to the site, and the most popular pages.

Please enable Strictly Necessary Cookies first so that we can save your preferences!